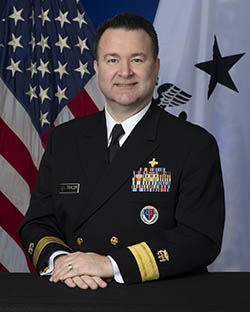 
Rear Adm. Brandon L. Taylor is the Director for DHA Public Health. He leads a Joint Services team whose mission is to provide force health protection by enabling a comprehensive, integrated, and effective, public health system that delivers timely, relevant, and actionable public health capabilities to the Joint Force, Military Services and the Department of Defense. DHA Public Health is comprised of more than 320 leaders and experts assigned throughout the world including liaison officers operating within the Northern, Southern, Indo-Pacific, and European Combatant Commands. His team is responsible to the DHA Director for mitigating and preventing health threats to the military family through 19 specific product lines.

Rear Adm. Taylor previously served as the Indian Health Service (IHS) Chief of Staff, where he oversaw key agency activity coordination and supported the Office of the Director in the development and implementation of IHS initiatives and priorities. He is an enrolled member of the Seneca-Cayuga Nation and has devoted his career to improve access to care in underserved communities throughout the world. Before this role, Rear Adm. Taylor served as an IHS Commissioned Corps Liaison, where he was the principal advisor to more than 500 officers, private sector leaders and local authorities for all United States Public Health Service (USPHS) Commissioned Corps matters.

Rear Adm. Taylor began his USPHS Commissioned Corps career as a pharmacy student, completing three Junior Commissioned Officer Student Training and Externship Program tours with the Federal Bureau of Prisons. He received his Doctor of Pharmacy from the Campbell University School of Pharmacy and began his IHS career as a pharmacy practice resident at W. W. Hastings Indian Hospital in Tahlequah, OK. Following residency, he served as the Director of Pharmacy for the Cherokee Nation Hastings Hospital. Rear Adm. Taylor holds a national board certification in Pharmacotherapy from the Board of Pharmacy Specialties.

Throughout his career, Rear Adm. Taylor has served in diverse positions of leadership. He served as Commander of the Tier I response team, Rapid Deployment Force 4, and has deployed on numerous missions, including Health and Human Services Afghanistan Health Initiative to Kabul in 2008, and to recover Puerto Rico from Hurricane Maria in 2017. In 2017, the United States Surgeon General appointed Rear Adm. Taylor as Senior Advisor for the Minority Officers Liaison Council, representing leadership from the chartered minority groups, where he served through 2020.