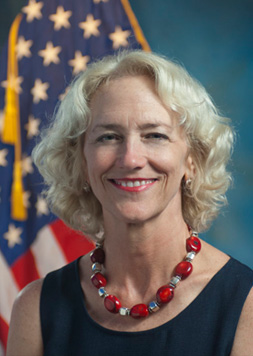 
Dr. Wright returned to CDC in December 2020 to serve as acting director in the Division for Heart Disease and Stroke Prevention. She recently completed a two-year detail in the Office of the Surgeon General as the acting Director of Science and Policy. In that role, she was charged with ensuring the scientific integrity of the Office’s projects, reports, and presentations and with engagement of powerful partners to advance the Office’s mission. During her service, the Office produced a Surgeon General’s Advisory on Mzarijuana and the Developing Brain; two Surgeon General’s Reports (Tobacco Cessation and Community Health and Economic Prosperity); and three Surgeon General’s Calls to Action
(Hypertension, Maternal Health, and Suicide Prevention). She received the 2020 Surgeon General’s Award for Exemplary Service.

From 2011 to 2019, Dr. Wright served as executive director of Million Hearts®, a national HHS initiative that CDC co-leads with CMS to prevent 1 million heart attacks and strokes over a five-year period. In the first five-year phase, an estimated 500,000 cardiovascular events were prevented through the efforts in all 50 states and DC and over 125 public and private partners.

Prior to federal service, Dr. Wright served as Senior Vice President for Science and Quality at the American College of Cardiology from 2008 to 2011, providing medical and scientific oversight of clinical guidelines, performance measures, health policy statements, and appropriate use criteria; quality improvement projects; and the National Cardiovascular Data Registry, a suite of databases containing millions of patient records in both inpatient and outpatient care settings.

Dr. Wright practiced cardiology for many years in Chico, California, and during those years, she served on ACC’s Board of Trustees, NCQA’s Physician Program Committee, and the Center for Information Therapy, a non-profit organization committed to the provision of personalized health information during each health encounter. Dr. Wright received her MD from the University of Tennessee Health Sciences Center and completed her internal medicine residency at Children’s Hospital and Adult Medical Center and her fellowship in cardiology at San Francisco General Hospital and the University of California, San Francisco.