Founded in 2000 by the World Heart Federation, World Heart Day is the world’s biggest cardiovascular disease awareness-raising platform. Every September 29th, the celebration informs millions of people around the globe about ways to improve their heart health. To spread our message, we launched the World Heart Day Thunderclap to make some noise for heart attack and stroke prevention.

Thunderclap is a “crowd-speaking” platform created to help groups and organizations amplify their message to the masses on social media. A Thunderclap campaign works by recruiting supporters to boost a timed message flash mob-style on various

The World Heart Day Thunderclap campaign was support by 166 individuals and organizations that boosted a social reach of over 1.6 million. Thank you to everyone who helped raise awareness about tackling heart attack and stroke as part of our drive to reduce premature deaths from cardiovascular disease including our partners: the World Heart Federation, the mayors of seven American cities, CardioSmart, Amgen and AstraZeneca. 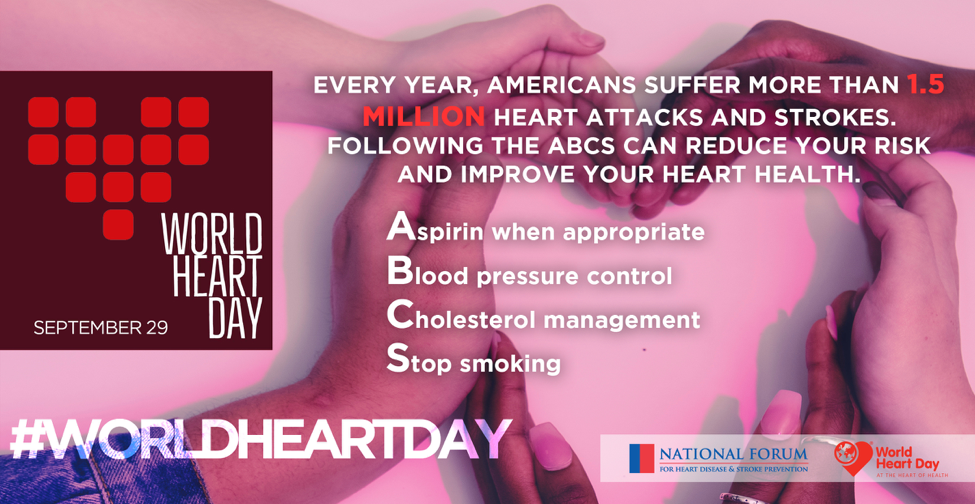 Why celebrate World Heart Day with Us?

Many people who are at high risk for heart attack or stroke don’t know it. The good news is that prevent and control these risks.

Smoking raises your blood pressure, which increases your risk for heart attack and stroke
Learn more at: Millionhearts.hhs.gov

WE ARE GRATEFUL TO THE 2017 SPONSORS OF WORLD HEART DAY IN THE U.S.